Bonne Espérance. The rich historical journey of an inner-city ensemble

A stone’s throw from the main square of Mons, Bonne Espérance is part of a larger project that reconfigures half of an elongated urban block bordered by the Halle street, the Jean Lescarts street, the Hautbois street and the Fish Market. Flanked by two new apartment buildings also designed by our Mons office - one to the northeast and the second to the southwest - the project consists in the conversion of a historical ensemble that originated in 1785 as the Refuge of the Abbey of Bonne Espérance into a contemporary apartment complex.

Versatility and resilience of a seasoned urban form

« Refuges » were historically created as the satellite facilities of major abbeys in towns they had a particular bond with. In times of unrest, members of the congregation and its treasures would find shelter in the refuges, protected by the urban community and the fortifications of the town. In times of peace, they hosted guests as well as delegations, and served as residence for the abbot during his visits to the city. Traces of many such refuges can still be found nowadays in the historical center of Mons, another one of which we also had the pleasure to convert into a residential ensemble: the former refuge of the Abbey of Aulne.

Few elements remain of the two original mansions erected alongside the Halle street: its neoclassical façades, the two hallways and their monumental oak staircases, and various ornements. In time, the building underwent many transformations, the most significant of which took place in the 1930s when the site was converted into local headquarters for the Belgian banking company « Générale de Banque ». At the time, the heart of the site was covered to host the counter hall of the bank, and a vault was created in the basement.

On the other side of the plot, alongside the Jean Lescarts street, constructions were erected in the early XXth century, presumably to host productive activities as the area had evolved throughout the XVIIIth and XIXth century into a highly mixed neighbourhood where urban workshops, warehouses and factories flanked a series of modest dwellings, stately houses organised around a central courtyard and a convent.

In the second half of the XXth century, the site was taken over by the Polytechnical School of Mons and retrofitted with  classrooms and libraries. Other organisations such as the local chapter of the Red Cross, the Walloon Mine Archive and the Mons-Hainaut University also rented classrooms, offices and archive rooms in the complex. The southern building alongside the Jean Lescarts street hosted the dissection room of the university’s medical school.

History as the catalyst of typological and architectural diversity

The main approach of the project consists in an in-depth refurbishment of the existing constructions without massive demolitions, preserving as a result the site’s identity, the formal coherence between the historical façades and the inner volumes, and the grey energy embedded in the materials that have been aggregated over time into the building structure. 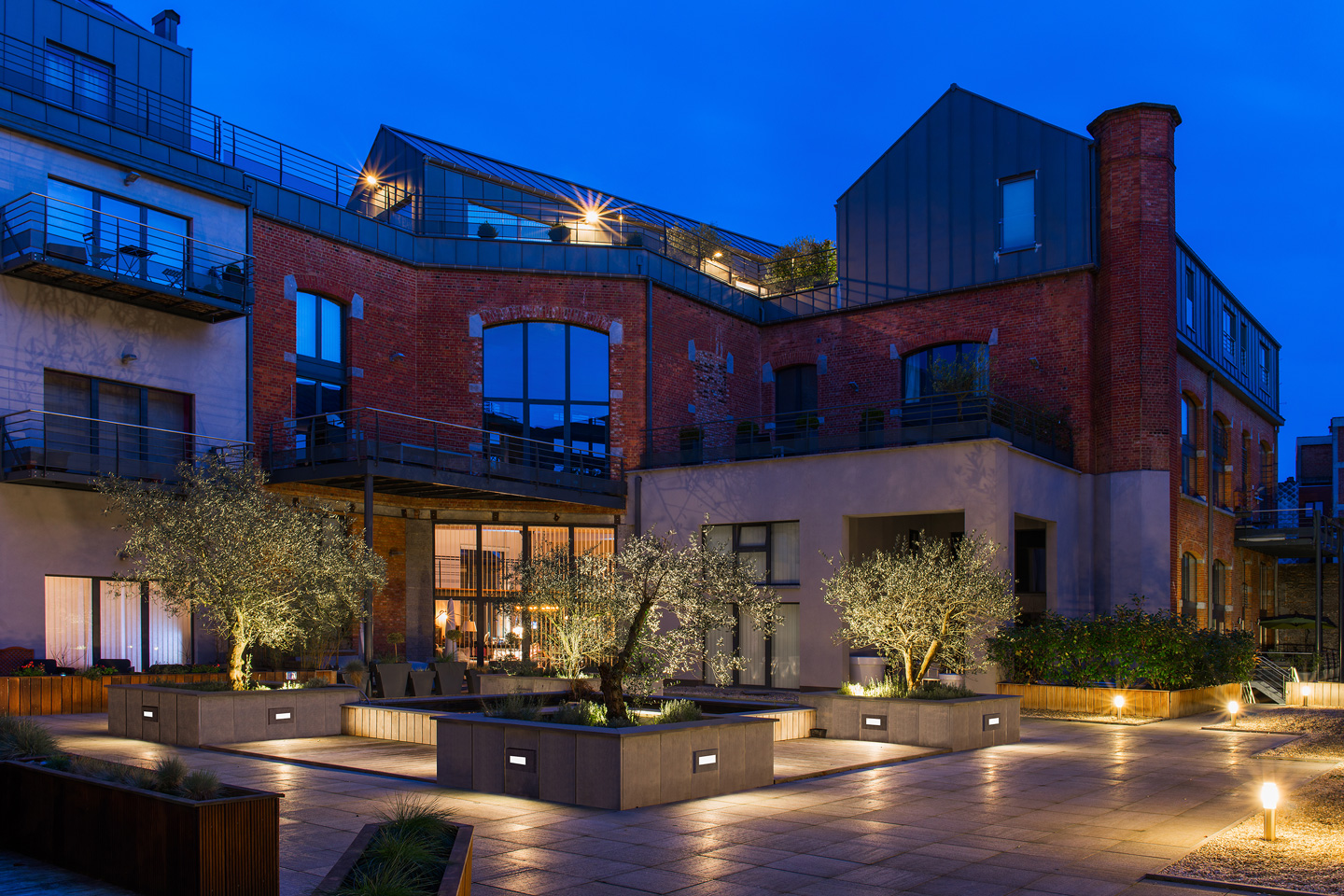 The only significant exception to this approach lies in the selective demolition of the former counter hall that covered the middle of the site, in order to create a communal courtyard bringing light, air and visual peacefulness at the heart of the block. At its center, a square basin reflects the sky and enlivens the space with the murmur of its gently simmering fountain and the ever-changing choreographies of its aquatic residents. As a way to foster convivial encounters amongst the inhabitants and generate a sense of community within the complex, all the vertical circulation cores of the surrounding apartment buildings enjoy direct access to and from the courtyard. Underground parking is provided under the courtyard and in the adjacent new-built developments that were functionally coordinated to that end with the Bonne Espérance project.

The clearing of the inner block enables the preservation and the adaptive reuse of the three main existing constructions on the perimeter of the site. 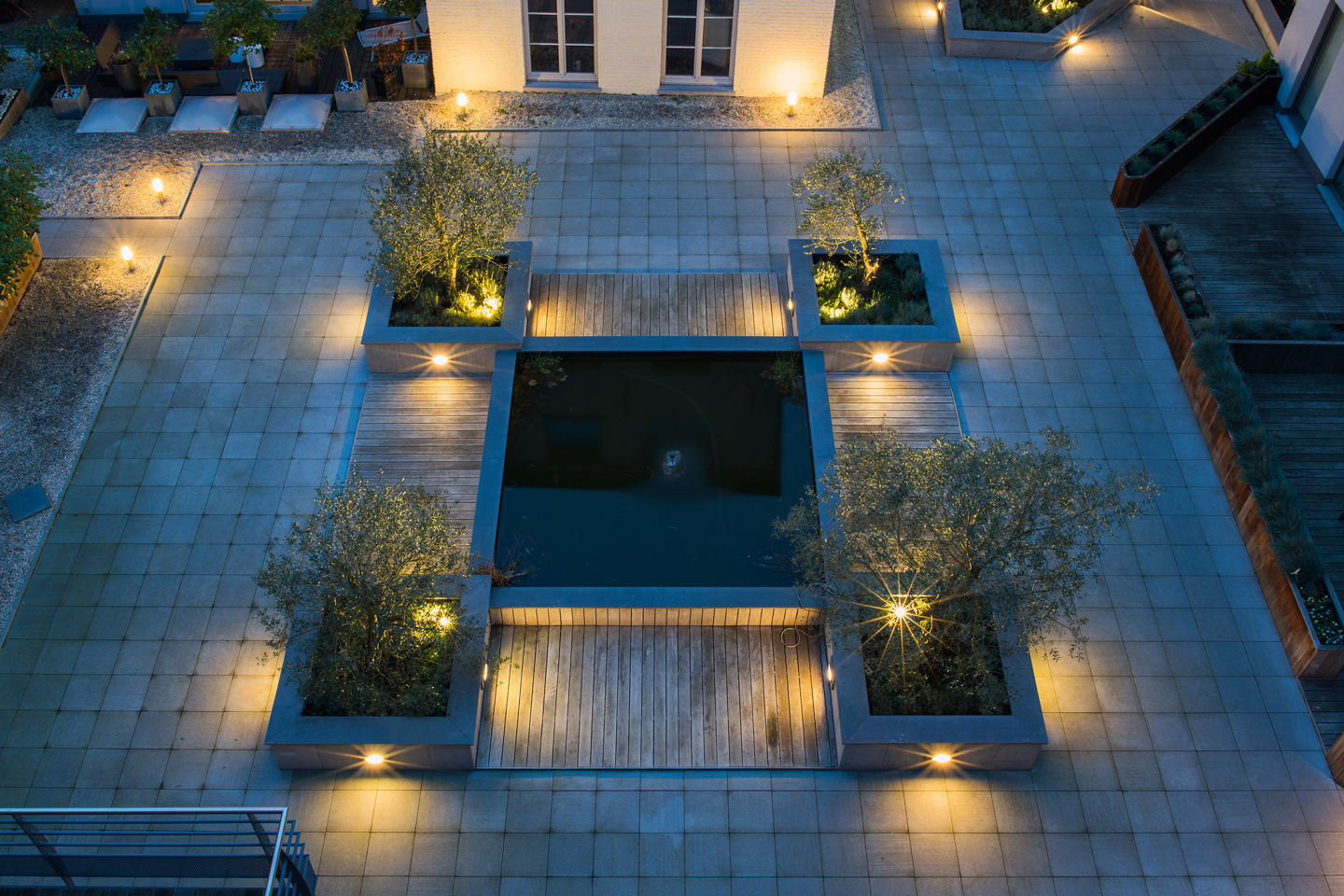 In the historical « refuge » alongside the Halle street, original stuccos and ornaments are preserved and integrated into the decoration of the apartments. Along with a generous ceiling height, they provide the living areas with a sense of grandeur and refinement. On the attic floor, the beautiful pre-industrial oak timber frame is left apparent, enriching the lofty inner volumes with its sinuous organicity. As a result, all the apartments of this section of the project are singularised by their unique and soulful historical features. 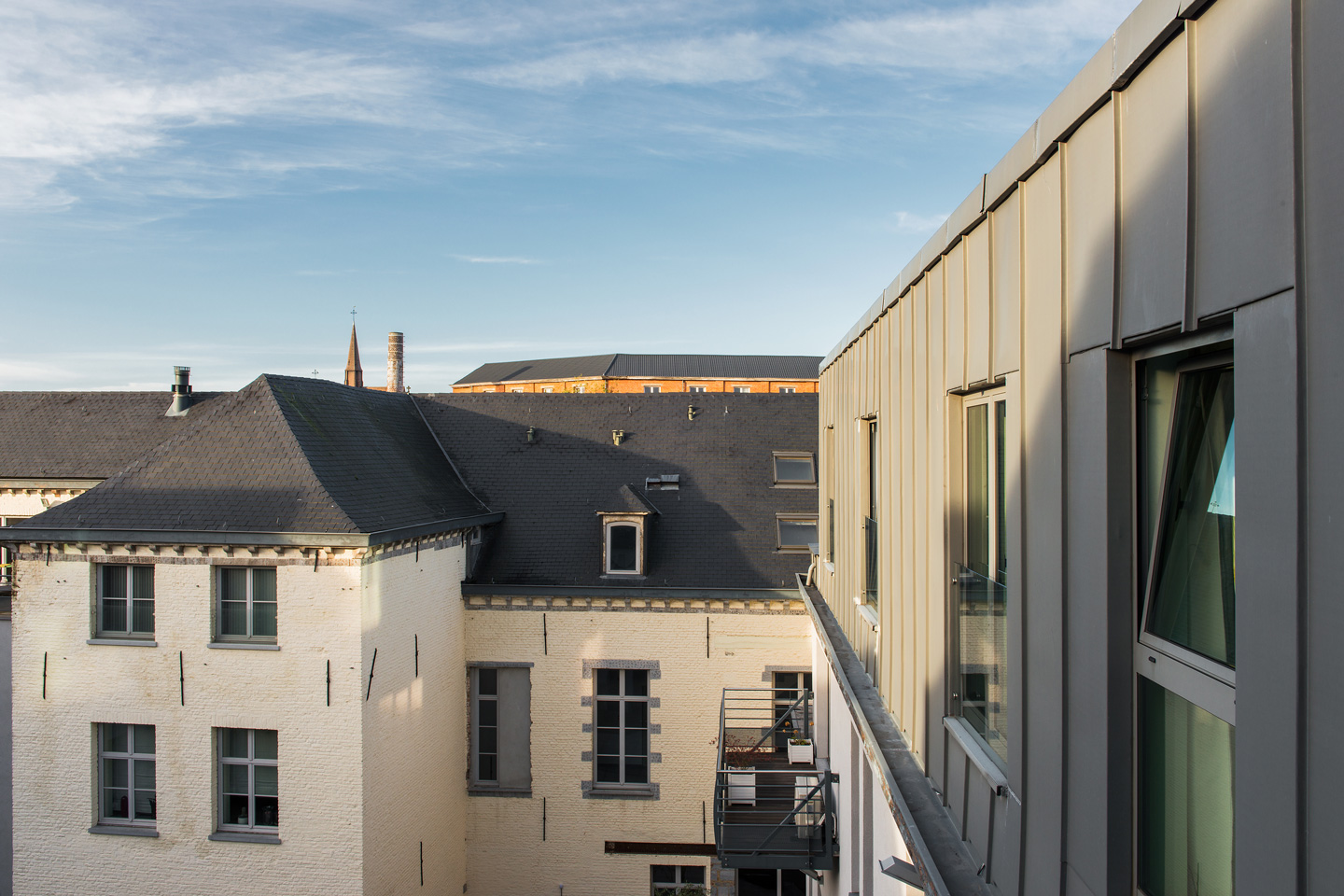 Without such notable pre-existing architectural elements or spatial proportions, the northeastern section of the project lent itself to lay-outs and designs more remindful of the characteristics of contemporary new developments.

Having exceptional floor to ceiling heights, the southeastern construction was retrofitted as an ensemble of spacious duplexes with double-height living areas, mezzanines and bold interior designs, catering to yet another type of lifestyle and urban sensitivity. 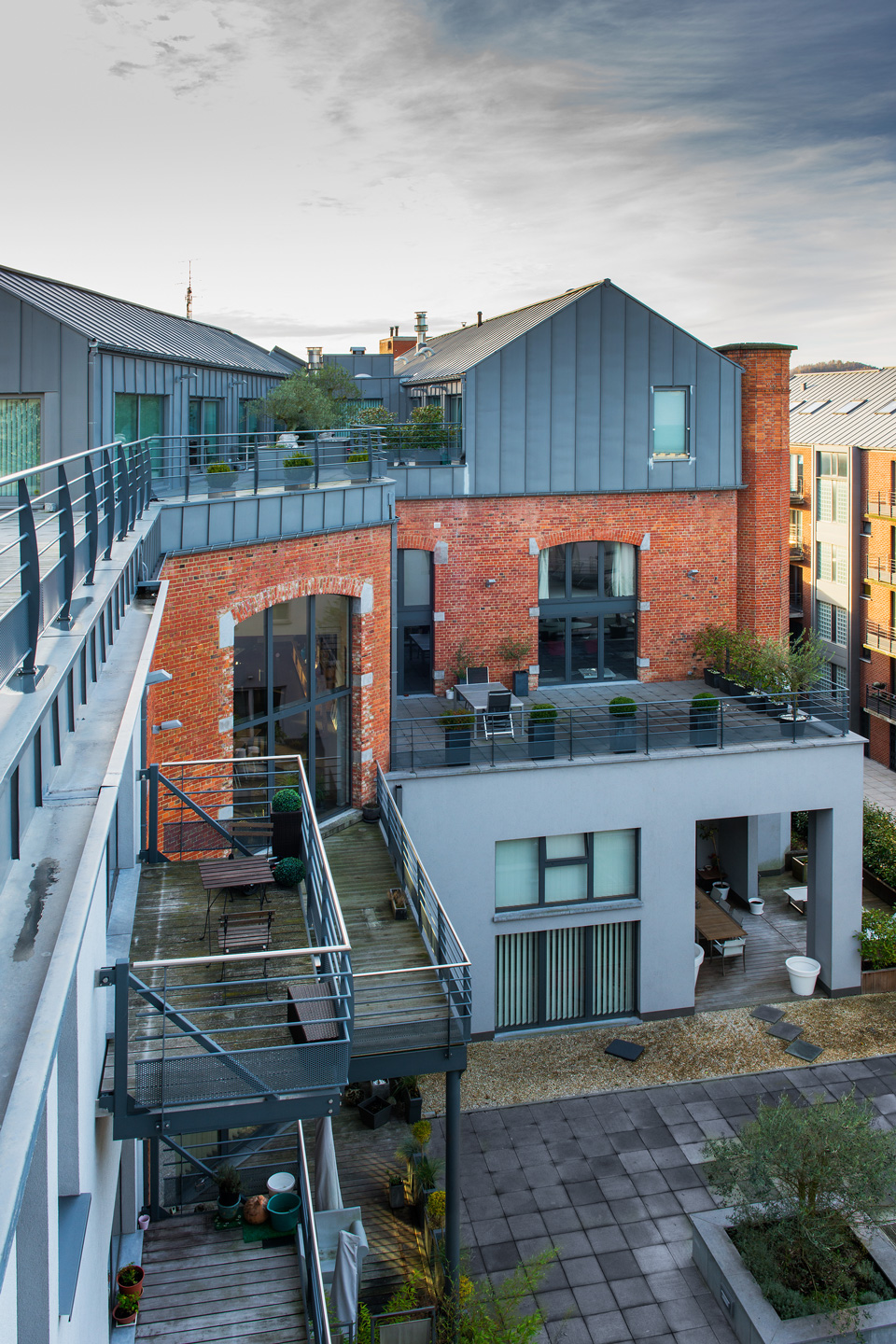 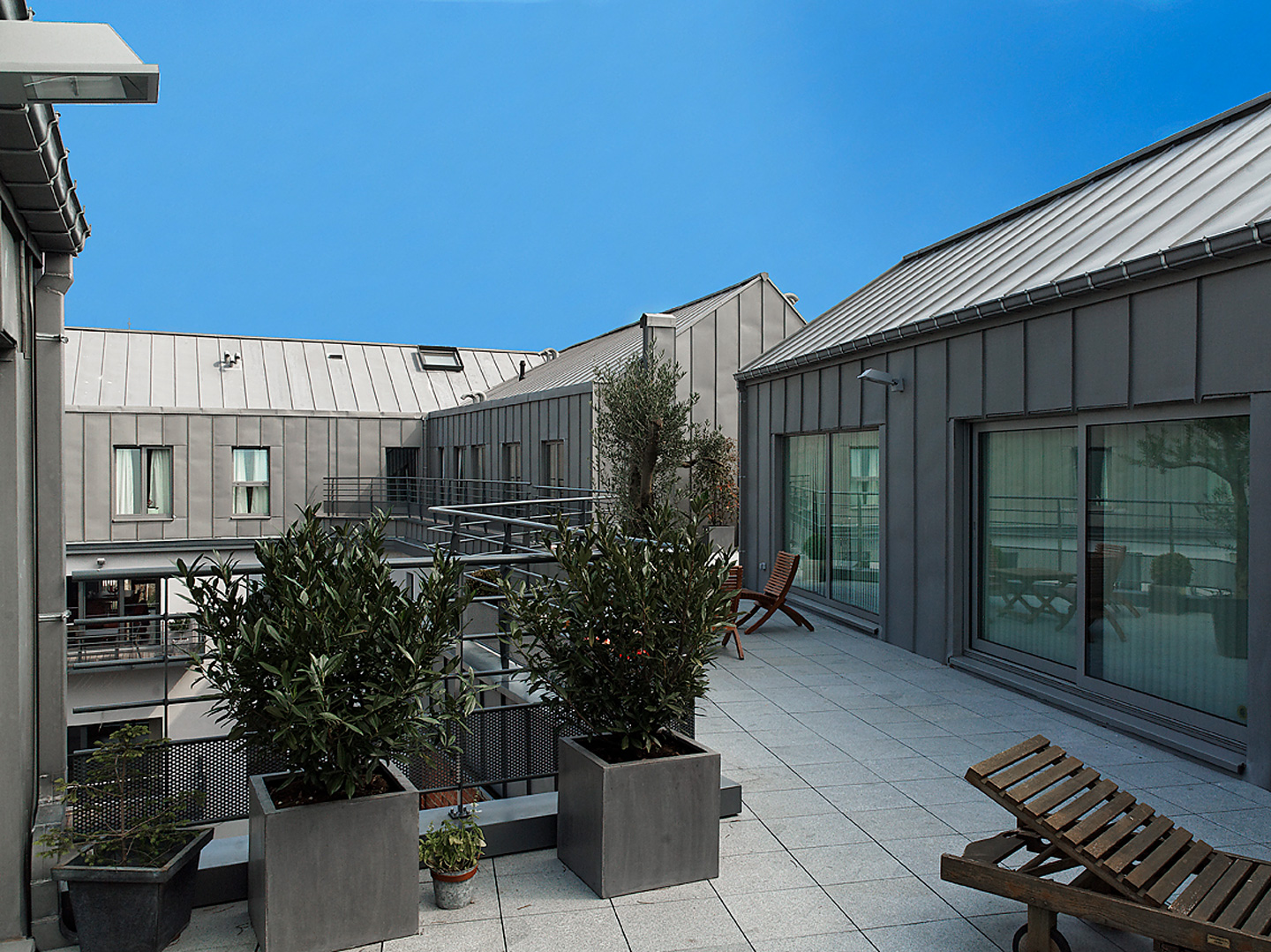 A light-weight zinc-clad attic floor was added on top of the flat-roofed early XXth century constructions. It acts as the contemporary counterpart of the attic of the refuge, with lively and ample inner volumes delineated by the sloped roofs, and platforms kept open to accommodate generous terraces.

Turning this intricate aggregate of buildings assembled over two centuries - with its wide variety of construction techniques, materials and geometries - into a diverse and harmonious ensemble was a major challenge throughout all the stages of the project. Calibrated to enhance each of the  construction’s original identity, the renovation took advantage of the pre-existing formal specificities to generate a rich diversity of typologies and architectural expressions within the 37-units residence. The resulting ensemble is richly complex, cohesive and intensely urban. 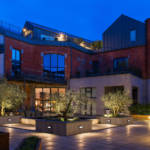 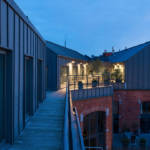 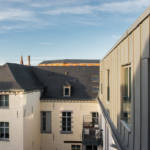 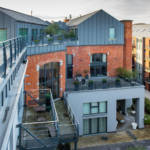 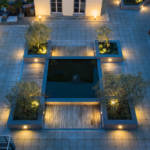 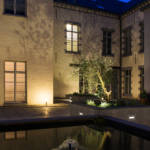 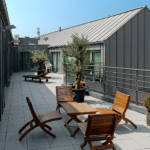 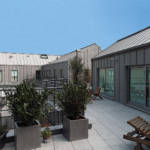 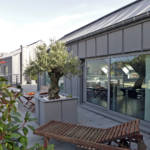 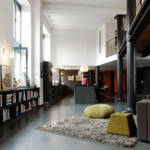 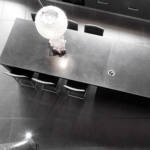 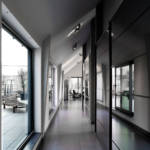 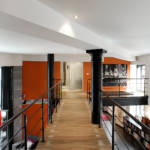