Everything in the context: Residential building in Brussels

The site of our residential project alongside the Parmentier avenue in Saint-Pieters-Woluwe is at the crossroad of several urbanistic influences. It is located at a transition point between a fabric of traditional townblocks composed of attached townhouses on narrow plots, and a less dense fabric composed of villas and other detached building types sitting on much larger plots. The buildings themselves are a mix of houses and apartment complexes, dating from periods ranging from the late XIXth century to the second half of the XXth century.

Uniting this heterogenous ensemble is the setback between the constructions and the street which leaves ample place to greenery, resulting into an overall pleasant and well-to-do impression. Only the constructions from the 60s and 70s break this harmony by dedicating most of their groundfloors to garages and their alleys, thus impeding on the continuity of the landscaped fringe between the public and the private spaces. 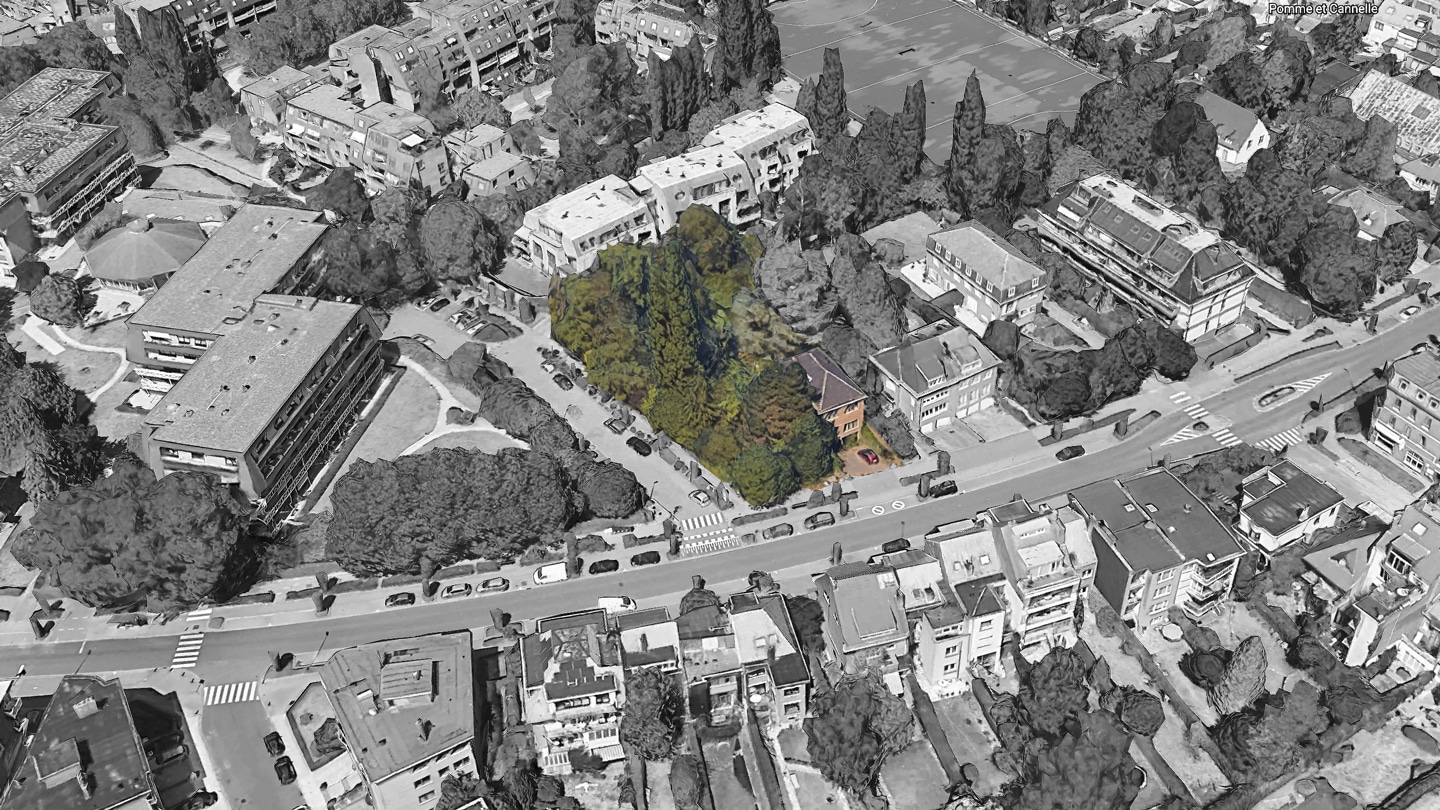 The urban block our site is a part of was a formerly immense block with the White Star sportsclub fields occupying all its center. The club moved in the 70s and the commune built a residential complex in its place - Les Venelles - offering approximately 330 affordable dwellings. The complex was conceived according to the principles of the « reactionary » urbanism of the 70s, also applied in Louvain-la-Neuve and Louvain-en-Woluwe. In reaction to the anti-urban principles of modern urbanism, the new neighbourhood was designed with pedestrian streets and attached appartement buildings raised above a large covered parking facility. The architectural style mixes bricks and wood cladding in intentionally diversified compositions where the shear walls and party walls act as an expressive unifying refrain.

Though the strong identification of the residents to their neighbourhood still proves the success of the design to this day, the stitching of the new ensemble to the surrounding pre-existing urban fabric was particularly poorly executed. Most of the connexions are mere interruptions in the narrow plot structure leaving the party walls of the adjacent houses exposed, where a small dead-end street flanked by symbolic sidewalks leads to a parking entrance on the side of which timid stairs lead to the pedestrians streets above. These poor connections are completely uninviting to pedestrians and foster a significant sense of insecurity.

Only in one place did the connections give birth to a more characterised urban form: the « Impasse Parmentier ». There, the width of the plots connecting Les Venelles to the Parmentier Avenue allowed for the creation of a proper street flanked with parkings on one side and a pleasant landscaped sidewalk on the other. Alongside the « impasse », two large remaining plots were developed in the 80s and 90s to create a senior residence and an appartement complex.

Our site is located at the corner of the « impasse » and the Parmentier Avenue. It was formerly occupied by a house built in 60s, fronting the avenue Parmentier with a wide double alley plunging towards its underground garage, and the « impasse » with its garden.

Our residential project comprises 15 apartments distributed over four floors. It equally fronts the avenue and the « impasse », thus enhancing the presence and the readability of the « impasse » and ultimately of the Venelles neighbourhood in their urban context. Views from the apartments onto the « impasse » also increase the sense of security for pedestrians. 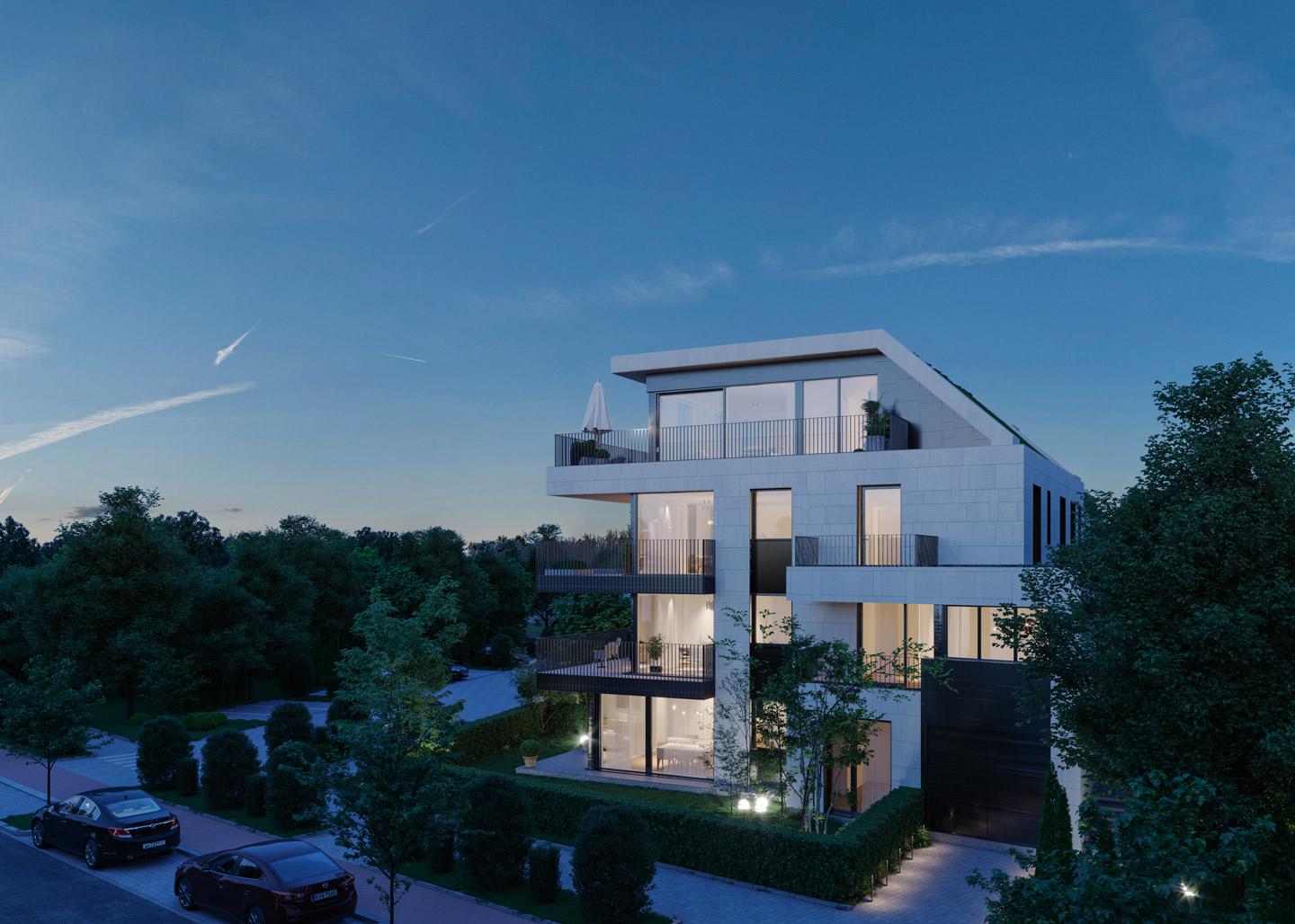 A dynamic, yet quite transparent facade manages to loosen up the spaces between houses and to provide inhabitants with intimacy

The apartments are organised in a succession of bays served by two vertical cores. As in the Venelles neighbourhood, shear walls are used as expressive elements that give depth and rhythm to the composition. Combined with deep balconies, they provide privacy and shade to the very open façades of the appartements. 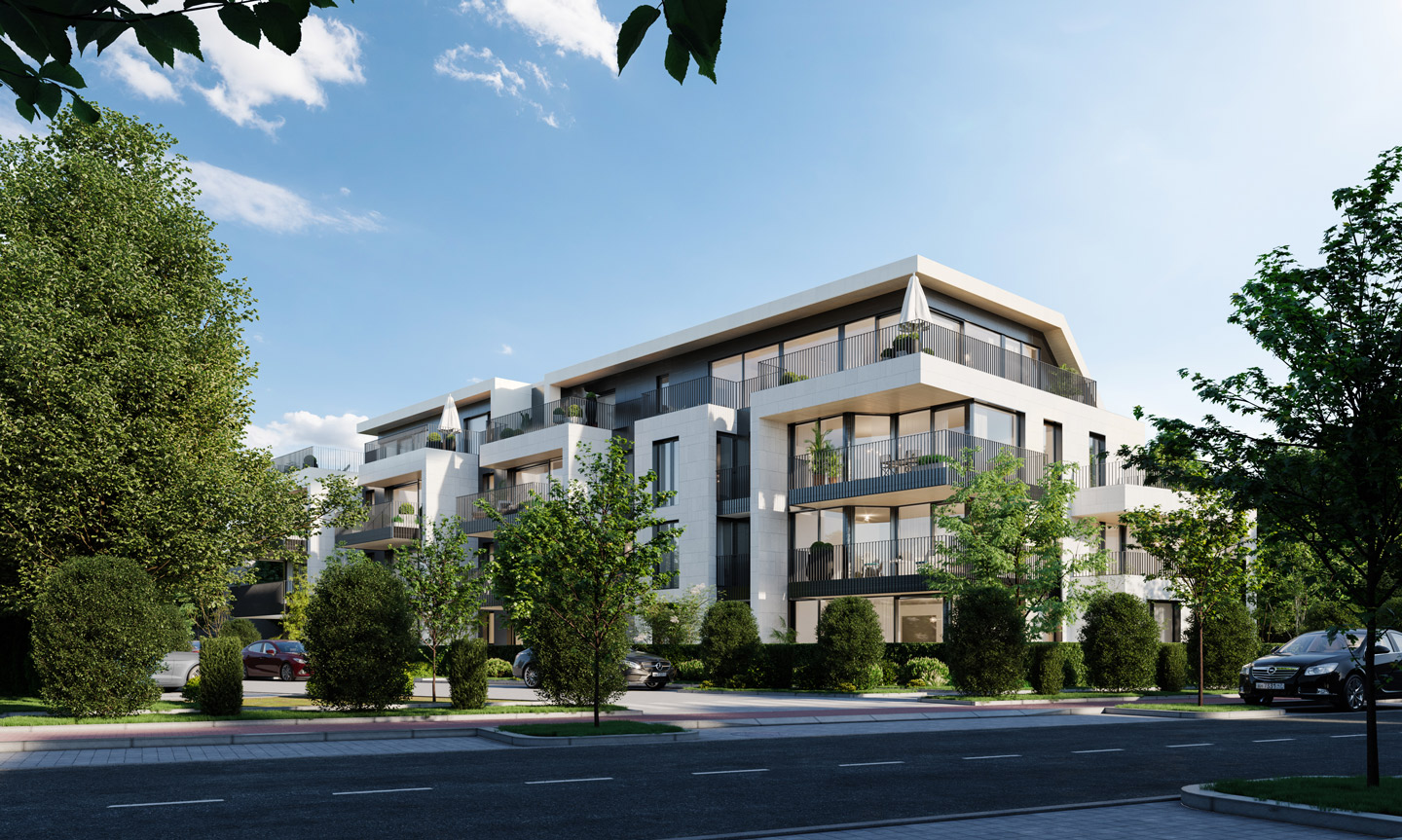 A thorough landscaping design dealing with the privacy issues

Alongside the public space, a setback of variable depth hosts a landscape arrangement composed of small and midsized ornamental trees, shrubbery and flowerbeds, not unlike the  front gardens of the turn of the century row houses a bit further along the Parmentier Avenue. Protected from intrusive views by a thick hedge, it is divided into intimate private gardens connected to the groundfloor apartments. 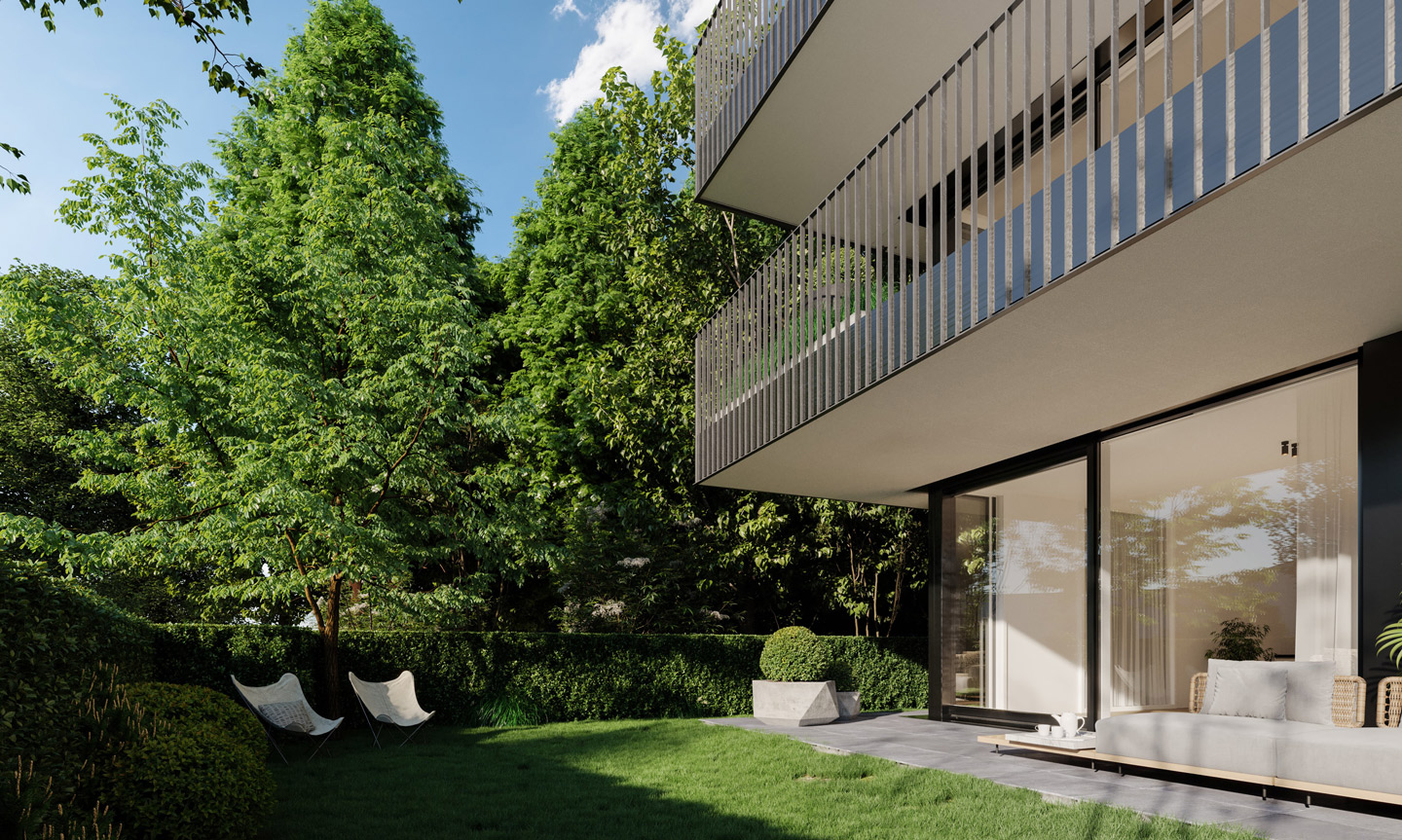 To the West of the plot, a screen of existing mature trees is kept and locally reinforced to ensure privacy between the project and the adjacent apartment complex. To the North, a combination of solitary and palisaded trees has been carefully studied to maximise privacy while minimising shading of the adjacent garden.

An adapting volume mediating between the surrounding architectural styles

While the new building presents a continuous front on the side of the public space where it faces a wide open space and a large residential ensemble, its back is visually divided into two main blocks connected by a deeply recessed volume, thus echoing to that side the scale of the nearby detached and semi-detached villas.

The fourth floor is recessed to the South, East and West allowing for large sunbathed terraces to surround the two penthouse appartements. To the North, it presents a sloped green roof. While preventing intrusive views and shading of the adjacent gardens, the sloped roof also acts as a blending background to the foliage of the trees that line the separation between our site and the neighbouring properties.

The façades are clad with Belgian blue stone, a natural and highly durable material from local origin. The cladding system is chosen to allow the individual removal of each slab to facilitate replacements in case of damages. The system also enables the dismounting of the slabs without damaging them, thus allowing the reuse of the noble façade elements if the building were to be demolished or its skin replaced. 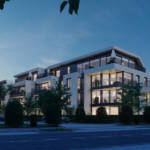 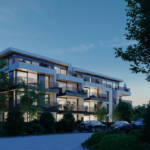 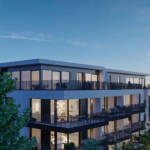 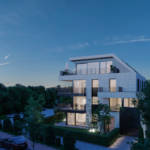 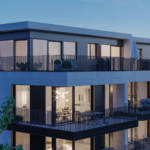 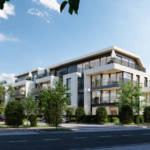 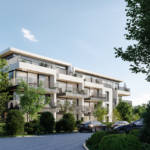 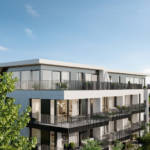 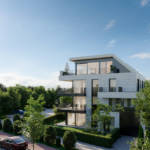 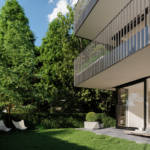 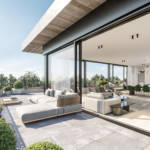 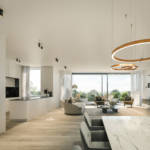 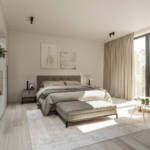