Upcycling an outdated office into affordable housing and a daycare

Our Pavillon project upcycles a former office building into a mixed-used ensemble comprising 41 affordable apartments and a daycare facility. The project was commissioned by Inclusio, a socially engaged private investor focused on bringing a response to the affordable housing crisis in Belgium as well as to the shortage of some local public services.

The former occupant, an education related public administration, decided to relocate, leaving behind an infrastructure at odds with its surroundings. It was unsuited for a contemporary office function and, close to the railway as it was, poorly located in regard of the new sustainable mobility strategies.

The neighbourhood itself is in a process of revitalisation, with a publicly sponsored initiative - a « contrat de quartier » - breathing new energies into it. Though privately funded, our project fits perfectly within the objectives of the « contrat de quartier » as it brings life and new services to a street challenged by the presence of raised railway tracks along one of its sides. 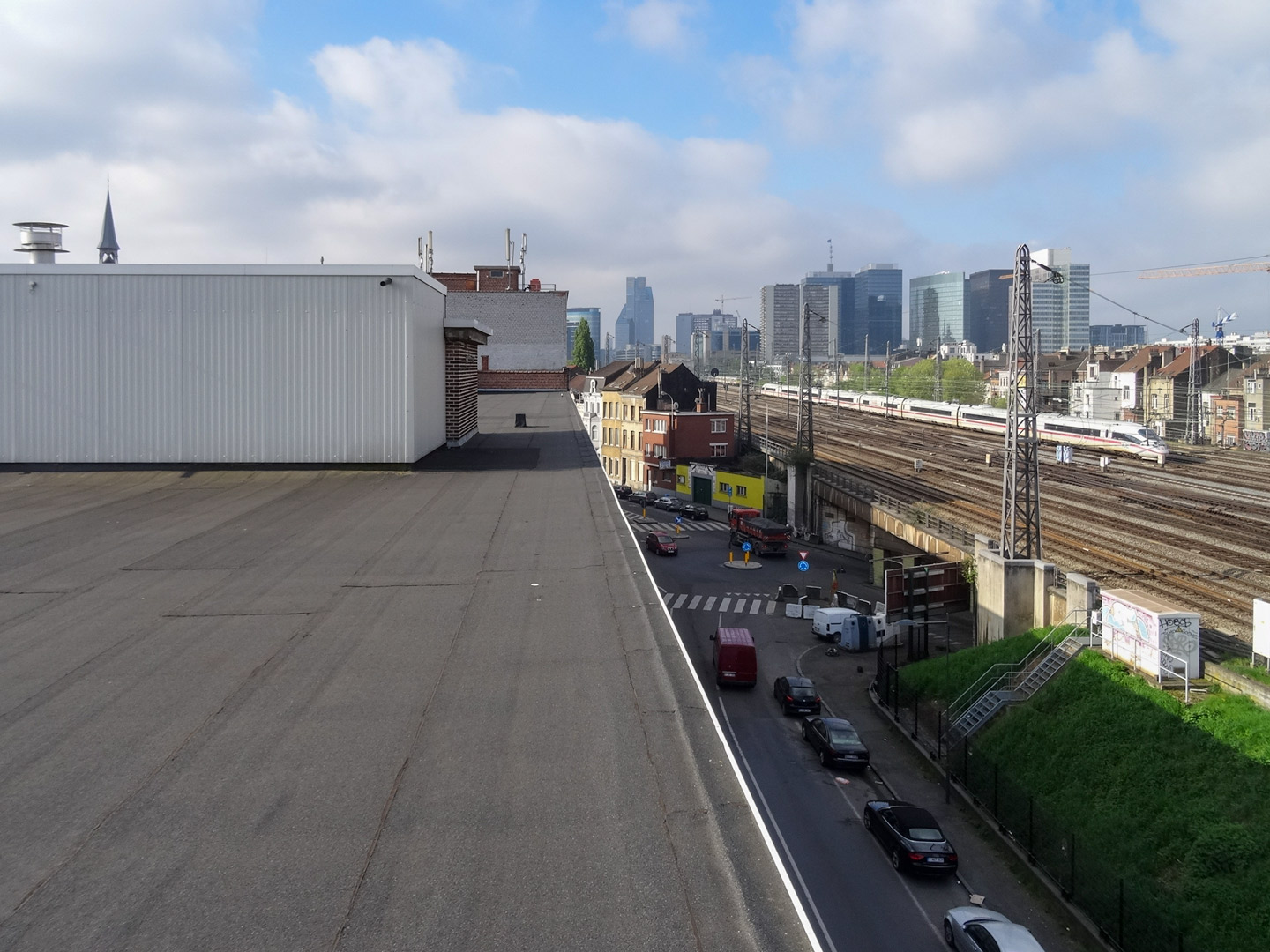 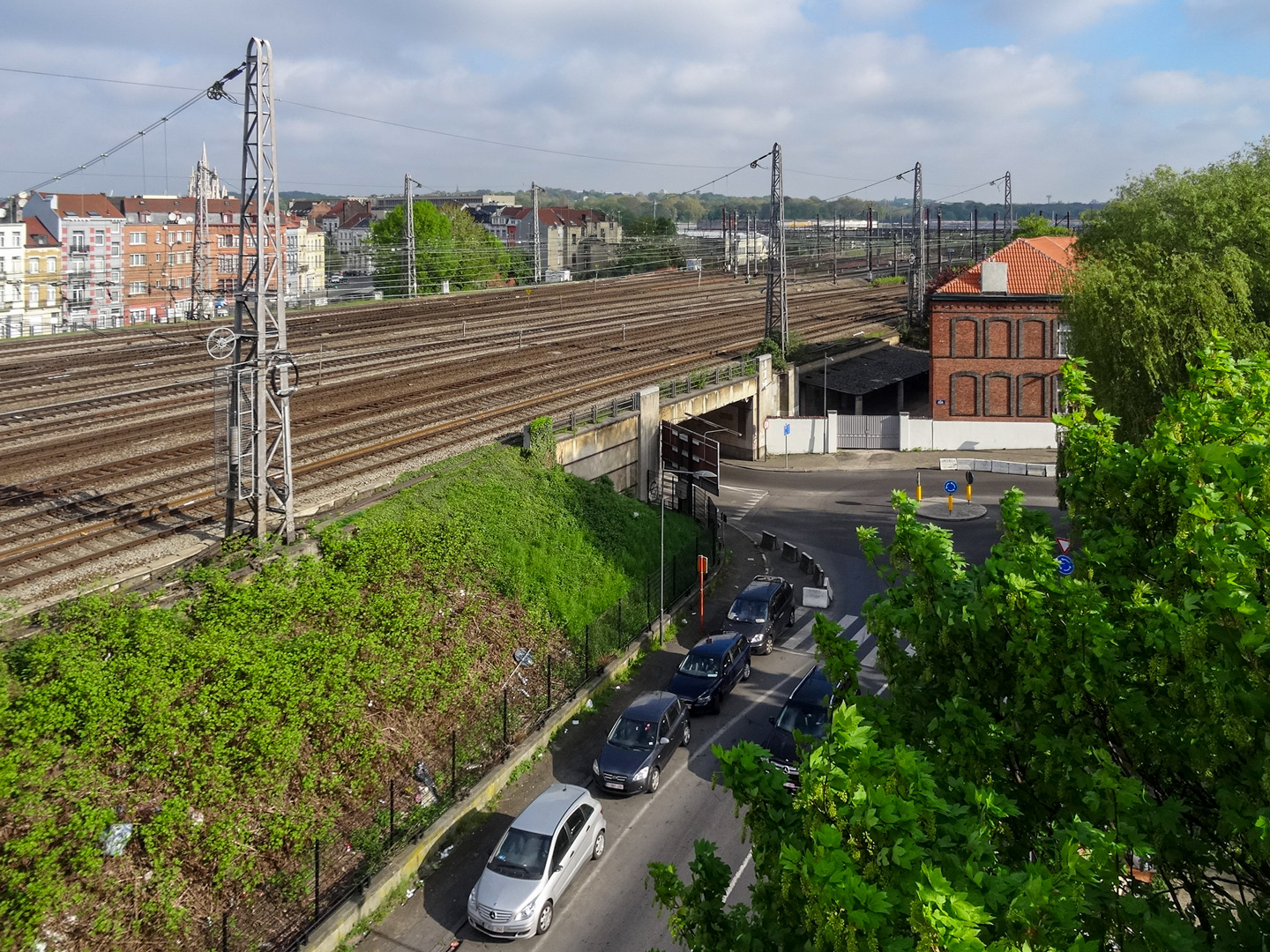 The edifice was built in the sixties. Though its skin and most of its mechanical systems are completely obsolete in regard of today’s climate emergencies, its structure is sound and its underground parking still perfectly functional for new occupants as well as other users in the neighbourhood. Keeping the structure was an immediate obvious choice both environmentally and economically. But it also raised significant technical and architectural challenges. 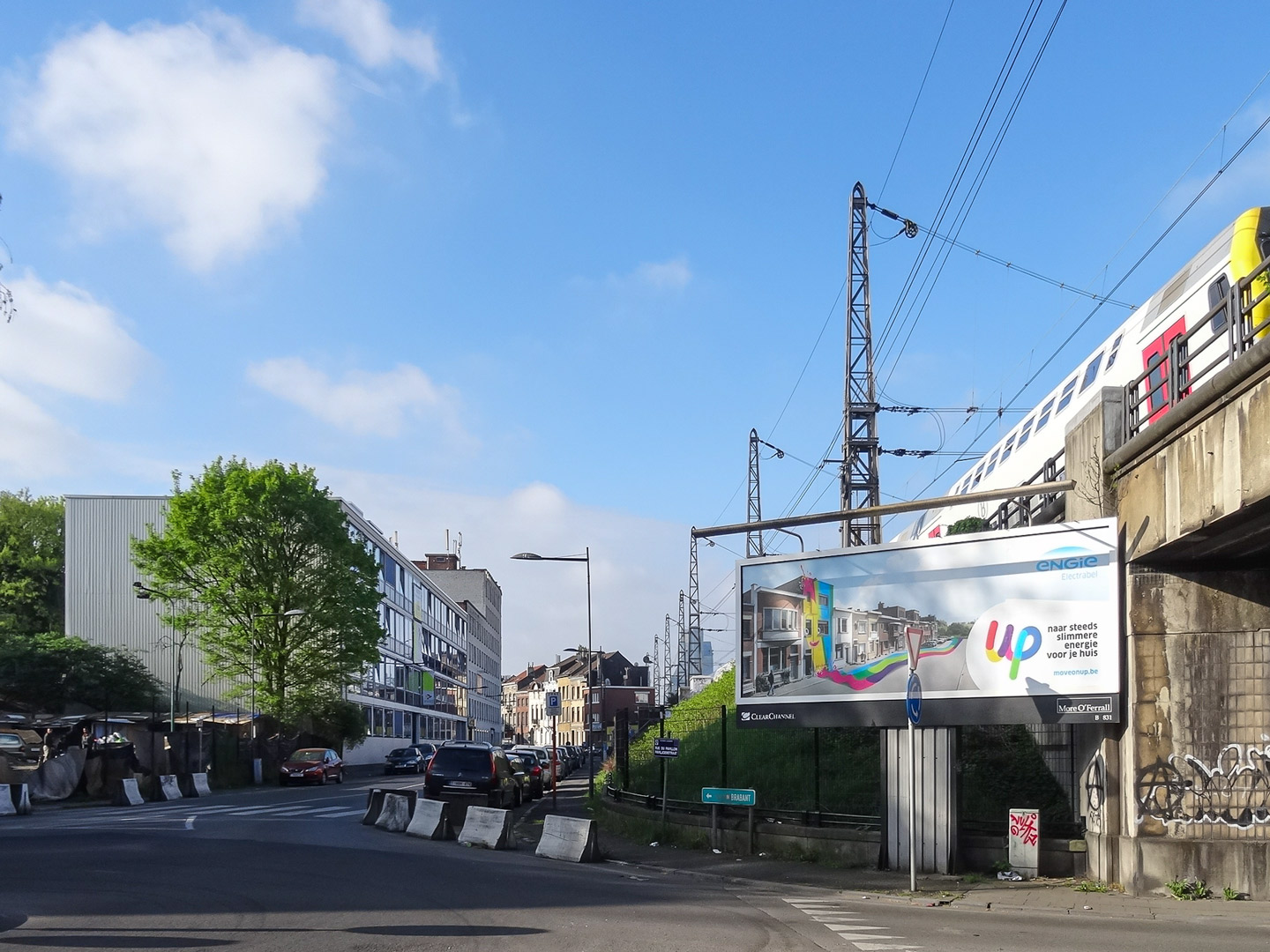 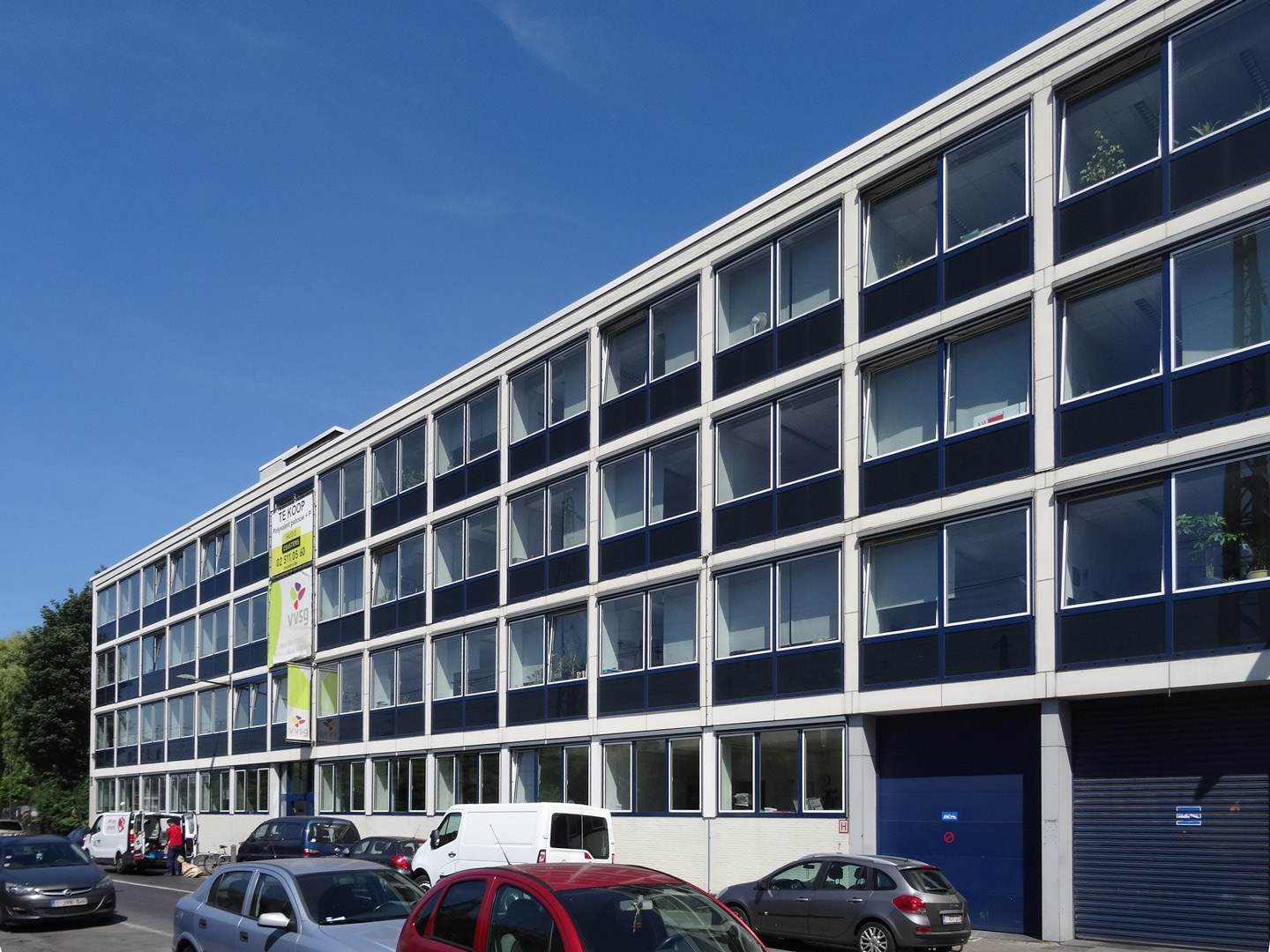 Breathing liveliness into the grid

The office building had a 55 meter long monotonous grid façade and a uniform distribution of functions, with the ground floor barely differentiated from the upper floors. It felt important to us to break this monotony in order to introduce liveliness, warmth and variety in the façade as well as in the apartment typologies.

The apartments are all accessible by the retrofitted central vertical core, thus minimising energy consuming structural alterations while maximising functionality and flexibility on the ground floor, allowing it to host other uses in the future than the original daycare facility. From the vertical core, the distribution of the apartments is achieved by a central corridor on one side and an exterior passageway on the other, resulting into a rich variety of single-sided and double-sided layouts, further enhanced by a mix of studios, one-, two- and three-bedroom apartments.

The inversion of the circulations also provides the opportunity to enliven the façade with a large expressive void animated by protruding cantilevered passageways. Along the passageways, the glazed fronts of the apartments are setback to give room to a semi-private front porch acting as a privacy guarding filter while also enabling informal encounters between neighbours. The boundary between the porches and the passageways is signified by randomly spaced unobtrusive vertical slats, a nonaggressive code allowing users to show equal respect for the private and the shared areas of the space. 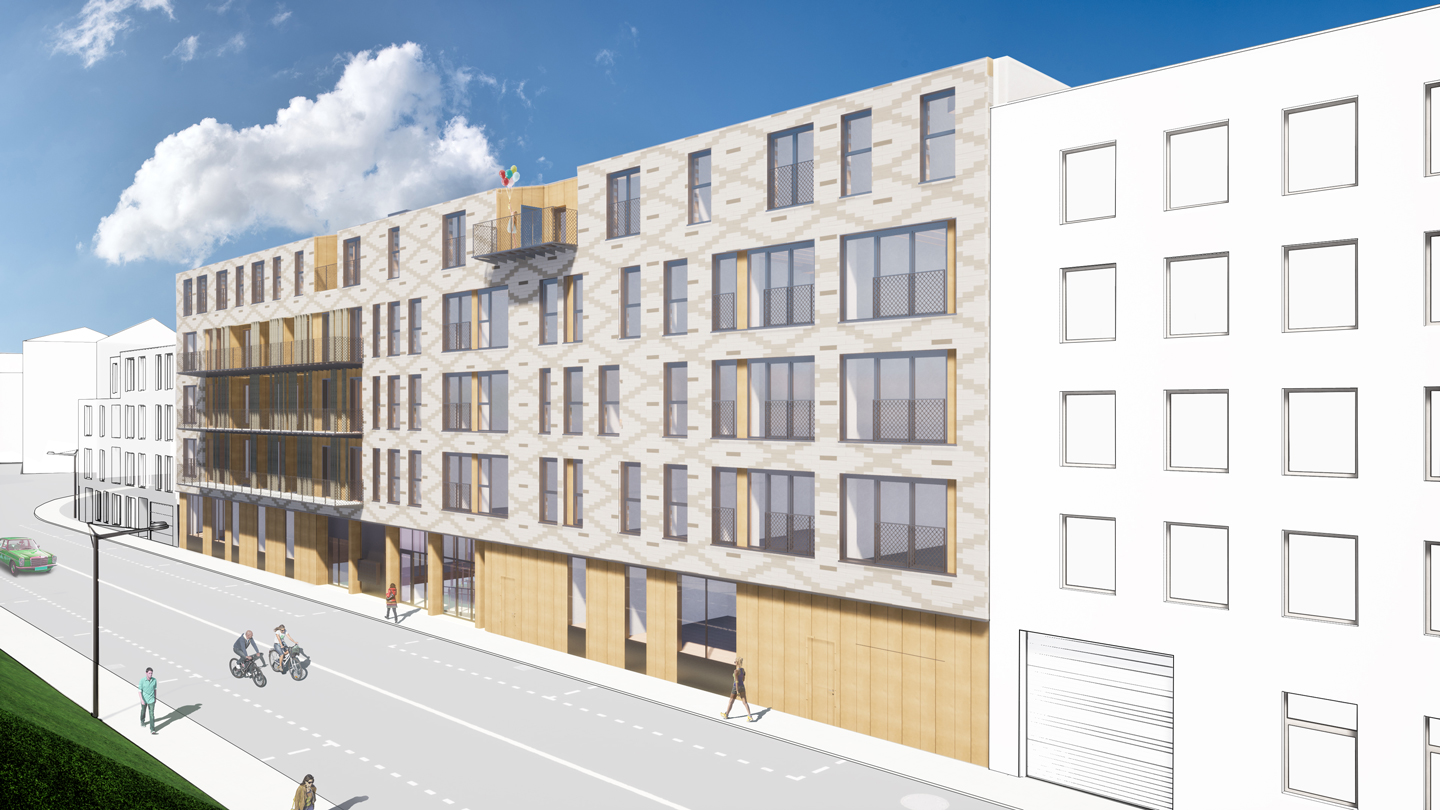 A light timber-framed floor is created on the roof of the existing structure. It enables the provision of the additional apartments while participating in the redefinition of the architectural expression of the building. The added floor alters the perception of the elongated façade whose original proportions felt inappropriate for a residential function. Two voids, that provide natural light into the main and the emergency stairs, break the skyline into three uneven sections, further enlivening the streetscape of the Pavillon street.

The cross section of the added floor is designed to avoid casting intrusive views and shadows on the neighbouring gardens. The volume is concentrated in the front while the setback at the rear hosts private terraces and the horizontal circulation. This third distribution type further increases the diversity of typologies in the complex and raises to about 50% the ratio of apartments enjoying private exterior spaces. 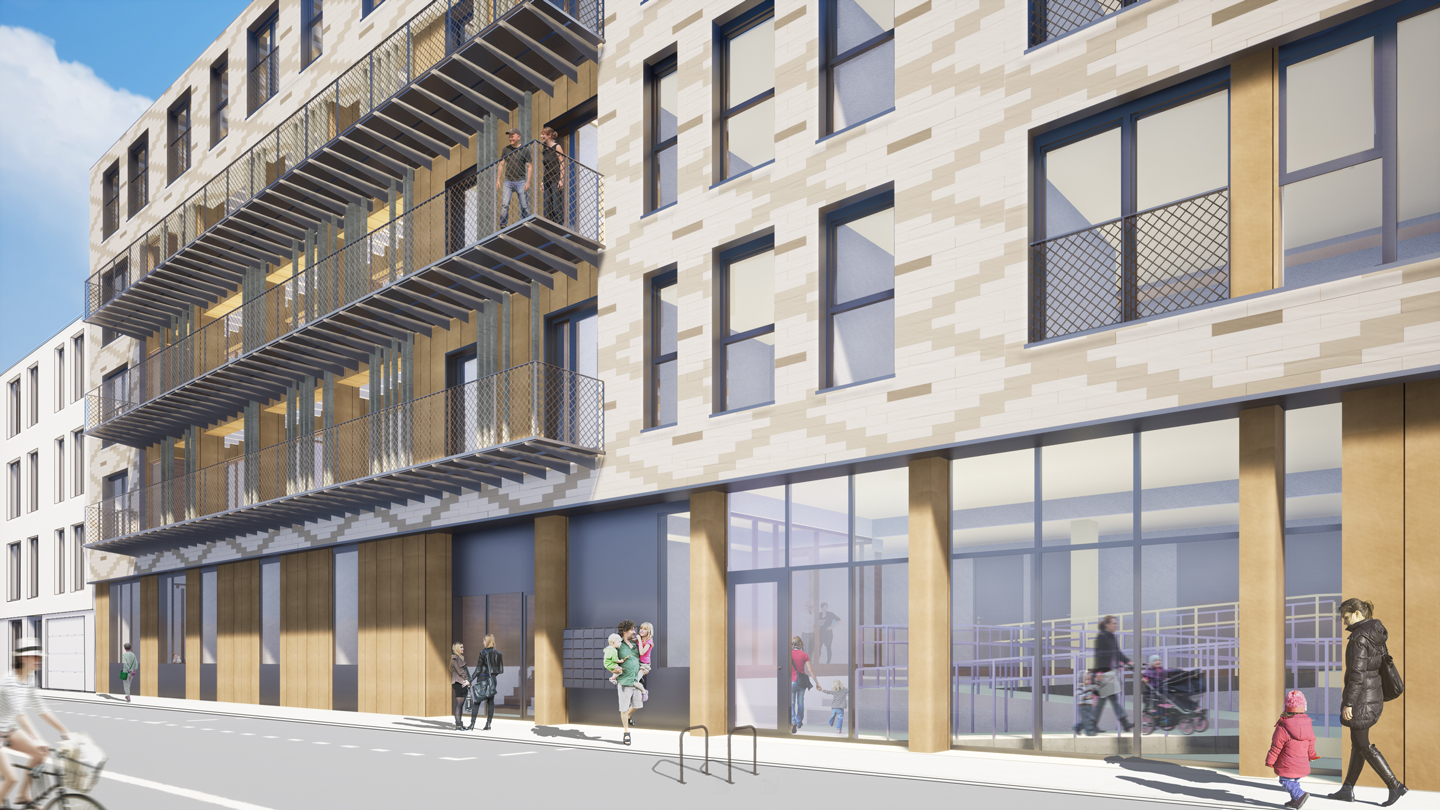 A facade that takes part in the revitalisation of the neighbourhood

On the ground floor, the opportunities offered by the programme are seized to enliven the public realm. The main entrance of the apartments, the hallway of the daycare facility, some of the playrooms and the caretaker’s cafeteria all participate in this animation.

In keeping with a long-standing urban tradition, the front façade is more elaborate than the rear one. While the latter is soberly white cemented, colour-mixed slates form the main skin of the apartments in the front, bringing a new energy and a vibrancy to this formerly neglected portion of the street. Contrasting in tone and scale, light-coloured fibre-cement panels underscore the ground floor functions and the voids, thus accentuating the legibility of the new composition. 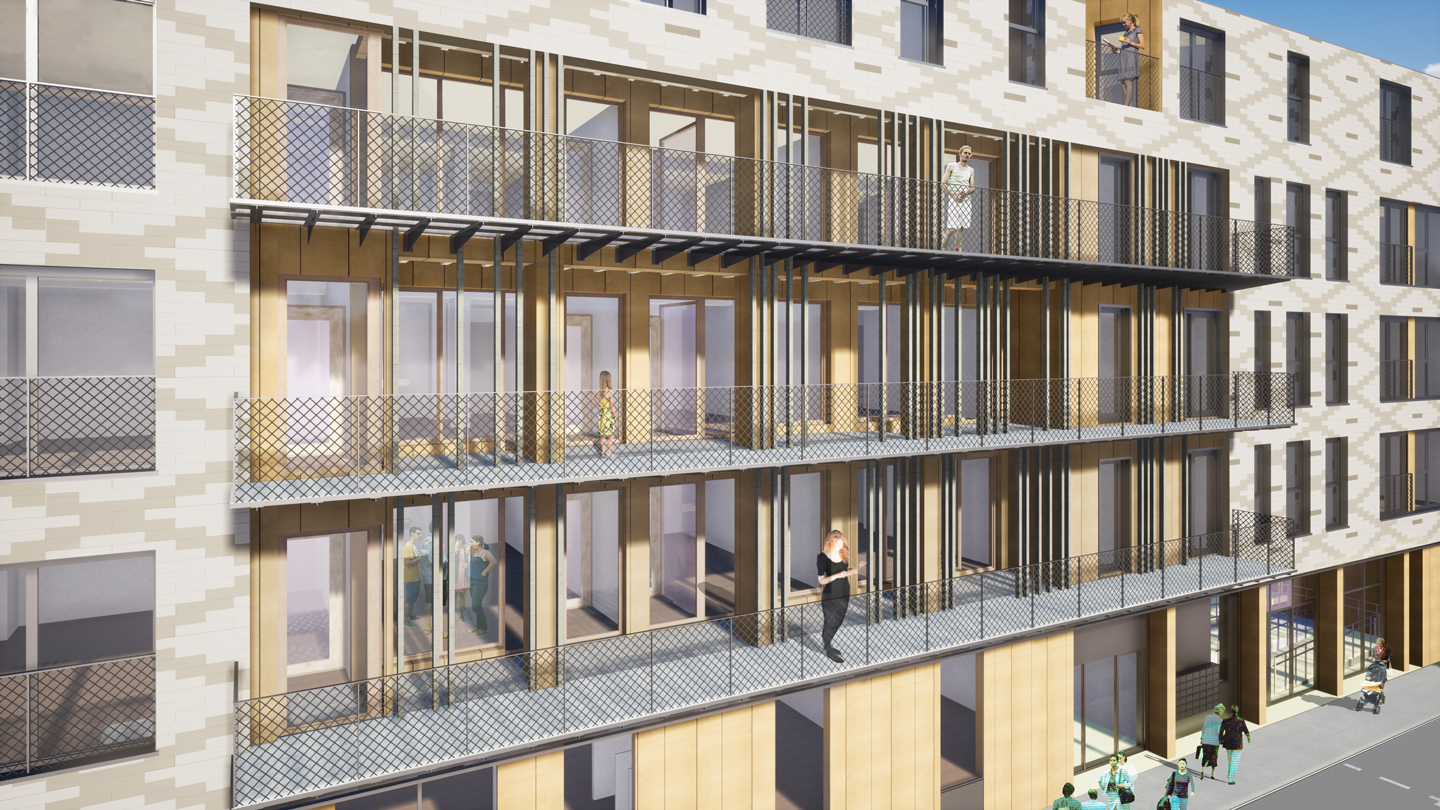 Removal of the existing interior fittings was completed in collaboration with Retrieval, a local demolition company specialising in selective deconstruction, reuse and recycling of construction systems and materials. For the new fittings, solutions had to be found to ensure thermal and acoustical comfort while taking into account the limited load-bearing ability of the existing structure. Specific techniques are therefore used to limit the weights of partitions, floors and façades, which also benefit the embedded grey energy content of the building.

Focusing on soft mobility, ample space is provided for bike storage both underground and at ground level for the daycare facility. As the number of parking spaces exceeds the needs of the residents of the building, surplus spaces are made accessible to the neighbourhood thanks to a partnership with a third party mobility solution provider.

The project is concurrent with projects by local authorities to retrofit the public space and to landscape the railway embankment across the street, resulting into a perfect synergy between private and public efforts to revitalise the neighbourhood. 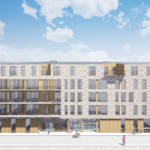 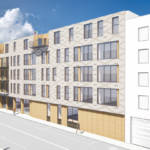 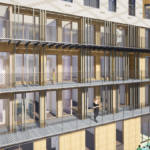 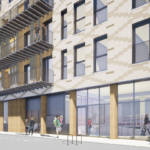 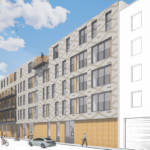 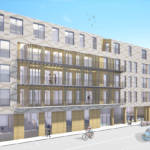 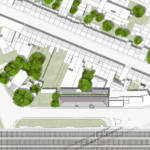 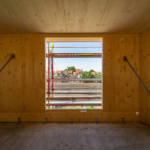 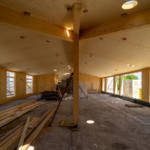 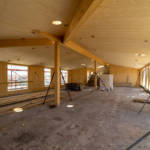 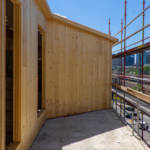 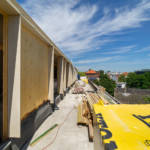 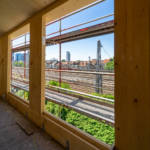 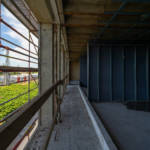 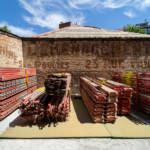 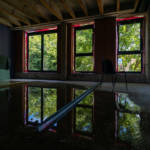 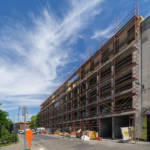